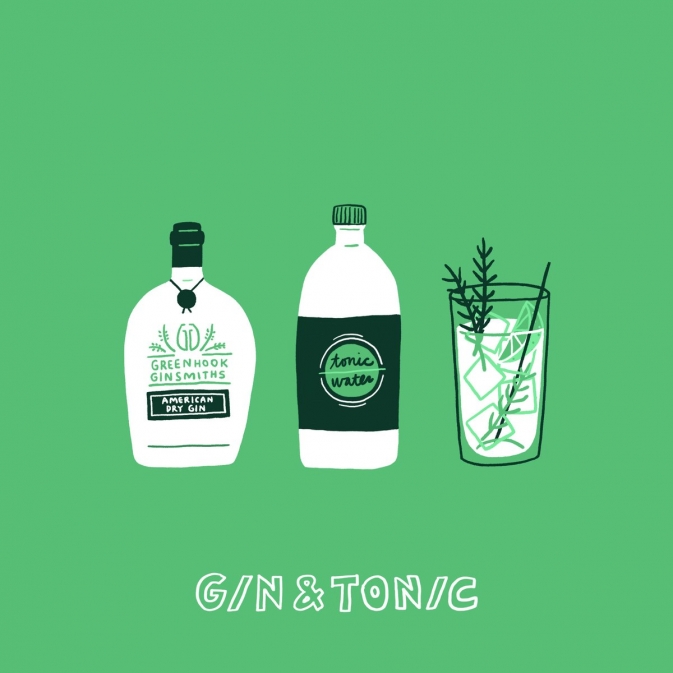 Similar to many spirits, gin was first created for medicinal use in 16th Century Holland(you can read more about its colorful history here!). A slug of “Dutch Courage” before battle became a British military tradition during the Thirty Years War—naturally the troops brought a few bottles with them back home, and to London in particular. The spirit became beloved by the lower-class, who were taxed heavily on cheap swill, and had stopped drinking beer due to rampant water contamination. It was cheap to make, and easy to buy or sell. A sweetened version was created for children—and the masses became blotto.

“The infamous liquor, the name of which deriv’d from Juniper-Berries in Dutch, is now, by frequent use… shrunk into a Monosyllable, intoxicating Gin. […] What I take from this is that the British were too drunk to pronounce genever [its Dutch title] so they abbreviated the word to ‘gen,’ which eventually gets anglicized to the word that we use today.”

The military’s love for gin and the continued myth of its medicinal properties grew during the colonization of India in 1857. Malaria was a constant risk to soldiers in the subcontinent, and popular thought was that bitter antidote Quinine (derived from tree bark) was more palatable when consumed with gin.

The creation of tonic water (which is flavored with quinine) by Erasmus Bond sealed G&T’s status as a lip-smacking, “medical” marvel in the 19th century, equally famous through new variations in the 21st.

Check out the original recipe, and a new fangled favorite that showcases American gin—a new hub for the distillers using botanicals from across the States.

In a Collins glass add ice, spirits and mixers. Garnish with a lemon & lime wedge squeezed & dropped into a glass. Stir and enjoy.

Britain remains famous for its cultural and historical ties to the Gin & Tonic, which remains crisp, citrusy, and simple to make on the fly. Next time you pop by your local store, however, try out a gin that showcases and speaks to the flavors of your own region!